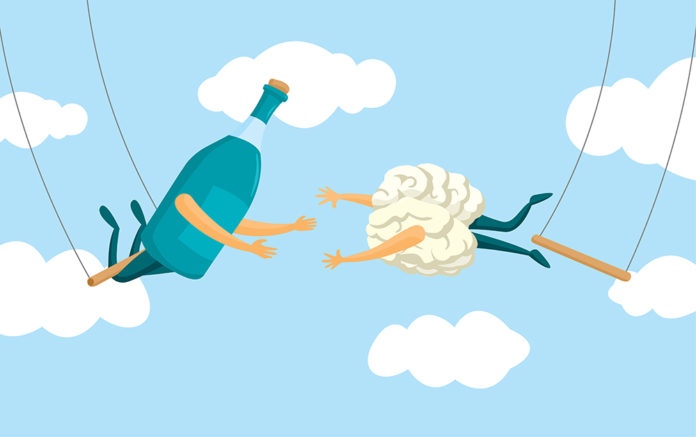 The impacts of heavy drinking on the human brain and the behavioral changes linked to excessive alcohol consumption were recently analyzed in a study conducted by researchers at the Laboratory of Neuroimaging at the National Institute on Alcohol Abuse and Alcoholism (NIAAA).

“Our sample has given us a chance to understand heavy drinkers better but not alcoholics,” Wang said. “These were functional heavy drinkers, but we can see that even if the person does not become an alcoholic their brain can already be showing signs of connectivity issues. Heavy drinking affects the brain tremendously.”

The group of heavy drinkers was composed of people who consumed at least five alcoholic beverages a day on three or more instances every week. The healthy control group included participants who had a history of light drinking but who did not have any more than one daily drink. The participants were examined on separate days and were randomly assigned to drink either alcohol or a placebo served in a special container with a lid that smelled of alcohol, which delivered the same liquid volume as containers with alcohol.

To assess the effects of alcohol on resting brain activity, the scientists performed magnetic resonance imaging (MRI) scans on all subjects and instructed them to remain awake but silent and motionless for five minutes. By the beginning of the MRI scanning sessions, the average blood alcohol level among the participants was 0.62 milligrams.

“We have improved imaging technology now and very well-suited methodologies that can enable us to extract information from the brain and understand how its functioning can change over the course of time and circumstances — for example, exposure to heavy alcohol use. We can see which regions are affected and what symptoms they can cause,” Kojori said. “It is an exciting time for us to work with novel tools and techniques, but at the same time, I think it’d be enlightening for society to know that our brain is very sensitive to changes that we sometimes knowingly or unknowingly impose ourselves. We need to take good care of our brains because they are very sensitive.”

Roughly 90 minutes after placebo or alcohol intake and 30 minutes before every MRI examination, the researchers performed motor evaluations and cognitive tests to measure the effects of alcohol or placebo on the behavior of each participant. They also collected self-reports about the effects of the substance consumed and people’s moods. The reports asked the subjects to score topics such as levels of stimulation, sedation, self-confidence, restlessness, intoxication, irritability, dizziness, anxiety, and alcohol desire — from 0 [not at all] to 10 [extremely]. Motor functions were measured in tasks, including rhythm and standing on one leg.

Heavy drinkers had significantly reduced levels of ‘neurocognitive coupling’— the association between brain activity and behavioral performance. But in both groups, alcohol consumption was found to affect the functional connectivity of parts of the brain including the precuneus and thalamus.

“This methodology gave us more chances to understand the local regions of connectivity in the brain,” Wang said. “The finding about the thalamus is especially interesting because we’ve never had a methodology that allowed us to see such connection and the importance of the thalamus like we did here before.”

The thalamus is a complex and crucial part of the brain, relaying roughly 98 percent of all sensory impulses — information from every sensory system except to sensory information related to the olfactory system. It’s also the… (continue reading) Am I an Addict?