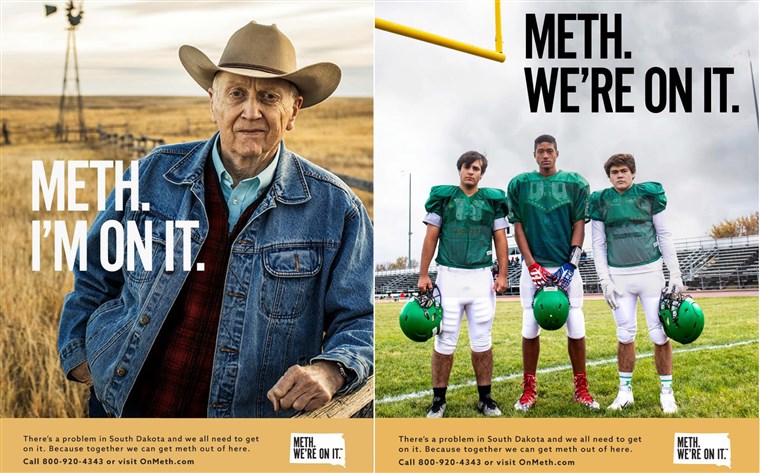 LOS ANGELES – “Meth, we’re on it” is the slogan for South Dakota’s new anti-methamphetamine campaign. Launched in mid-November, the public relations effort, which has been widely mocked across social media, is aimed at people battling meth addiction, as well as support for prevention and education in the state’s communities.

With billboards, Facebook ads and commercials coming next, the state is also working with nonprofits to get people battling meth addiction the treatment they need.

“South Dakota’s meth crisis is growing at an alarming rate,” Governor Kristi Noem says in a video on the anti-drug campaign website. “It impacts every community in our state and it threatens the success of the next generation. This is our problem and together, we need to get on it.” While news about the opioid crisis consumes most of the nation’s attention, methamphetamine has made a giant comeback, especially in western states like California.

“There is not a day that goes by that I don’t see someone acutely intoxicated on methamphetamine. It’s a huge problem and it is 100 percent spilling over into the emergency room,” Dr. Tarak Trivedi, an ER physician in Los Angeles, said in an interview with California Healthline.

Likewise, South Dakota is facing an immense challenge with the highly addictive stimulant.

Teenagers in South Dakota use meth at twice the national average and drug courts there deal with more meth cases than any other type of illegal substance. For a state with less than 1 million residents, the trends and statistics are incredibly troubling.

“3,336 people were arrested last year because of meth in SD. 13 people died. These numbers are more than just statistics. They’re missing faces. Empty chairs. Meth is an epidemic in our state, and we all need to pay attention. Let’s get on it. #MethWeAreOnIt,” Governor Noem tweeted on November 19.

Most of the online ridicule of South Dakota’s campaign is pointed at the slogan’s double-entendre “Meth, we’re on it,” as well as the price tag for the campaign. Buzzfeed News reports that South Dakota paid Minnesota ad agency Broadhead Co. nearly $500,000 to develop the promotion.

Though the slogan may seem simplistic or, as others have said, too amusing to take seriously, the public relations campaign launched itself into the national conversation, trended on social media and has received too many media reports, including this one, to count.

A spokeswoman for the state’s Department of Social Services told several media outlets that the goal of the slogan was to get people, especially South Dakota citizens, to stop what they were doing, process the meth issue in the state and learn about the available treatment and prevention resources.

In response to all the social media snickering, Gov. Noem continued to drive the message home over the weekend.

“Hey Twitter, the whole point of this ad campaign is to raise awareness,” she tweeted. “So, I think that’s working.”