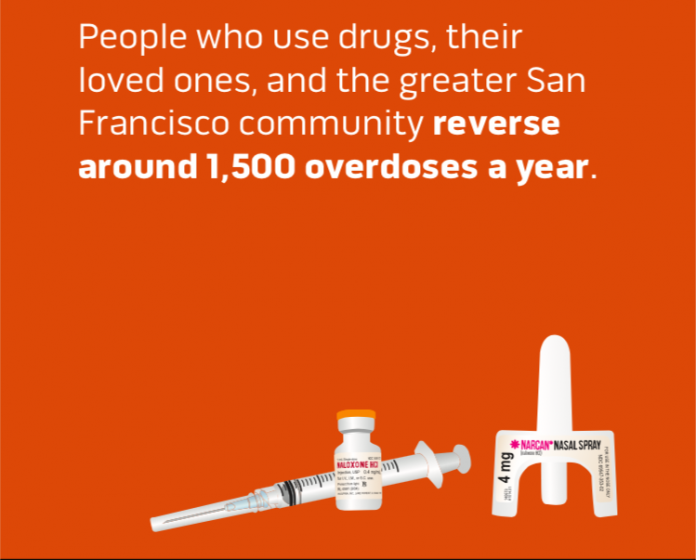 LOS ANGELES – The state of California has one of the lowest rates of fatal opioid overdoses in the nation, as data from the National Institute on Drug Abuse (NIDA) shows. Still, like other parts of the country, opioids, especially synthetic opioids like fentanyl, are one of the biggest drivers of drug related deaths in the state.

Volunteers at the Drug Overdose Prevention & Education (DOPE) project in San Francisco are doing their part to stop drug deaths by teaching people, more than 13,000 so far, how to use the opioid overdose reversal drug naloxone.

It’s not understatement to say that efforts of the DOPE project, a program of the Harm Reduction Coalition (HRC) since 2005, are at least in part responsible for the state’s lower rate of drug deaths.

The focus of the DOPE Project’s latest campaign, “Know Overdose,” is unique in that they collaborated with a segment of the population that’s often overlooked or, at worse, ignored in public awareness promotions: the people who actually use drugs.

“This campaign was inspired, shaped, and ultimately created by people who use drugs in San Francisco,” Kristen Marshall, a project manager at DOPE, writes in the campaign’s acknowledgements. “These are their faces and strategies, stories, and lives, and each person featured in this campaign has helped ensure the safety and survival of their fellow San Franciscans.”

Marshall and others tasked with launching the “Know Overdose” campaign reached out and listened to communities in San Francisco affected by drug use. They wanted to know what type of messaging would break through to the people most at risk of fatal overdose. They spoke with people who do drugs in a party setting, people who live with someone that uses drugs, kids and adults struggling with homelessness and users that inject drugs among others. As a result of this cooperation with different drug-taking and adjacent communities, the campaign is broken into several sections: facts and information on overdose prevention, the strategies of people who use drugs, as well as the portraits and stories of San Franciscans who have survived overdose, are at risk for it or those who work on the frontline of harm reduction.

The “Know Overdose” campaign is striking and comes with practical messaging, such as suggesting people not use drugs alone, that users should try ingesting or smoking rather than snorting and that knowing the signs of overdose and always carry a naloxone kit can save someone’s life.

According to its website, the DOPE project “is the largest single-city naloxone distribution program in the country.” Working closely with other harm reduction organizations, like syringe access programs and Jail Health Services, DOPE is able to circulate free injectable naloxone kits to drug users, their family members and loved ones, as well as to others who might just happen upon someone who’s overdosed.

“People who use drugs, their loved ones, and surrounding community are responsible for reversing on average 1,500 overdoses a year with DOPE Project naloxone,” adds the website.

For more information about the campaign, visit the “Know Overdose” site.