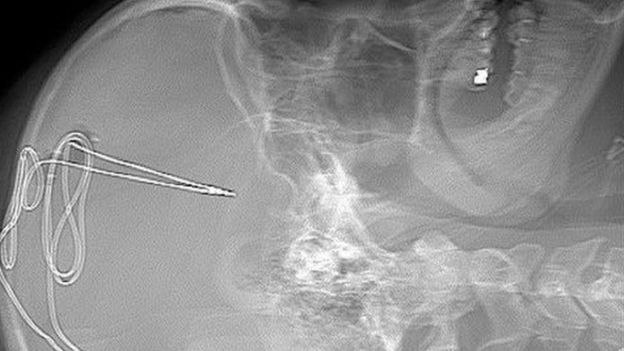 When he was 18 years old, Gerod Buckhalter was prescribed opioid painkillers as the result of a football injury. For more than a decade after, he battled treatment resistant addiction, overdosing and relapsing numerous times. In November 2019, he became the first patient to have a tiny, 1mm electrode implanted in the brain, with the hope that it will help him overcome his addiction struggles. “Our team is working hard to find solutions to help those affected by addiction,” Dr. Ali Rezai, executive chair at RNI and the lead investigator on the study, told WVU Today. Rezai added that researchers should explore technoligies with the potential to impact areas of the brain associated with the disease.

The deep brain stimulation implant, or as Dr. Rezai refers to it, a “pacemaker for the brain,” has already been approved by the U.S. Food and Drug Administration to treat conditions like Parkinson’s disease, epilepsy and obsessive-compulsive disorder.

Powered by a battery that surgeons place beneath the collarbone, Dr. Rezai’s team of neurologists, psychologists and addiction experts will monitor patients’ brain activity, watching for any decrease in drug-related cravings over the next several years. Each of the four patients that will undergo the surgery has treatment-resistant opioid use disorder, meaning therapies like medication-assisted treatment, social intervention and behavioral approaches in a comprehensive inpatient, residential or outpatient facility have not worked for them.

“Despite our best efforts using current, evidence-based treatment, there exist a number of patients who simply don’t respond,” Dr. James Berry, director of Addiction Services at RNI told WVU Today. “Some of these patients remain at a very high risk for ongoing catastrophic health problems and even death.”

As the opioid epidemic continues to ravage communities across the country, killing on average 130 people every day, reports the Centers for Disease Control and Prevention (CDC), West Virginia has been hit particularly hard. Data from the National Institute on Drug Abuse (NIDA) finds that the state has the highest age-adjusted rate of drug overdose deaths involving opioids.

Still, this type of study does have some critics. In September 2019, the UK’s Royal Society, founded in 1660 to promote excellence in science, released a report titled iHuman: Blurring lines between mind and machine. It suggests the British government should investigate neural interface technologies, devices that are “implanted in the body or worn externally, which are capable of recording or stimulating activity in the brain and peripheral nervous system.”

In an interview with BBC News, Dr. Rezai agreed that these devices should be “heavily regulated,” but added this type of surgical approach is only for patients that have failed all other treatments and that they are not commercial grade products.

“I think it’s very good for science and we need more science to advance the field and learn more about the brain,” Rezai told the BBC.

Drug and Alcohol Treatment in Hartford Supported by New Program