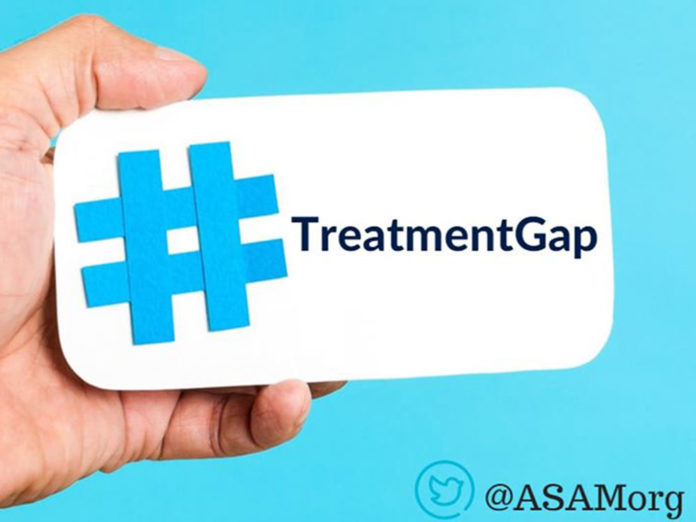 The American Society of Addiction Medicine (ASAM) announced last week that the first Addiction Treatment Gap Awareness Week is occurring from April 24th to April 30 — a full week dedicated to identifying the gap between the number of Americans who need addiction treatment and those who receive it.

ASAM hopes that through events focused on education, this week will highlight the fact that although more than 20 million Americans are believed to struggle with a substance use disorder (SUD), only 1 in 10 people receive treatment. Opioid addiction is estimated to affect more than 2 million people in the U.S., but nearly half receives treatment.

ASAM is hoping that Addiction Treatment Gap Week will not only bring attention to education and addiction treatment, but also raise awareness for the stigma around addiction.

“Moving addiction from a what historically has been a criminal justice and a moral failing issue, into a health-related whelm, the stigma associated with the disease will finally begin to dissipate in a significant way and people will see treatment is possible and recovery happens,” said Dr. Yngvild Olsen, an at-large member of the ASAM Board of Directors, addiction specialist and chair of ASAM’s Public Policy Committee. “Especially now with the opioid epidemic, there are millions of Americans who have a substance use disorder but don’t receive treatment.”

But the problem is not limited to just opioids. More than 15 million Americans suffered from an alcohol use disorder in 2015, but less than 10 percent of them received any kind of treatment.

“The opioid epidemic has put a big spotlight on this treatment gap issue, but we can’t forget about alcohol,” Olsen said. “There are also pharmacotherapies that have been shown to be effective for alcohol addiction but aren’t widely used.”

So many people with an SUD end up without access to proper treatment due to the fact that “the workforce of physicians and other health care professionals who are trained and specialized to treat addiction is woefully inadequate,” Olsen said.

According to data provided by ASAM, only about two percent of all doctors in the U.S. are currently able to provide medication assisted therapy, and more than 30 million adults live in areas that don’t have any of these providers. “As we, as a country and as a society, really move in the direction of fully treating and addressing addiction as a chronic brain disease, we need the workforce, we need to expand the workforce,” Olsen said.

ASAM is not attempting to close the addiction treatment gap alone. Federal organizations such as… (continue reading)