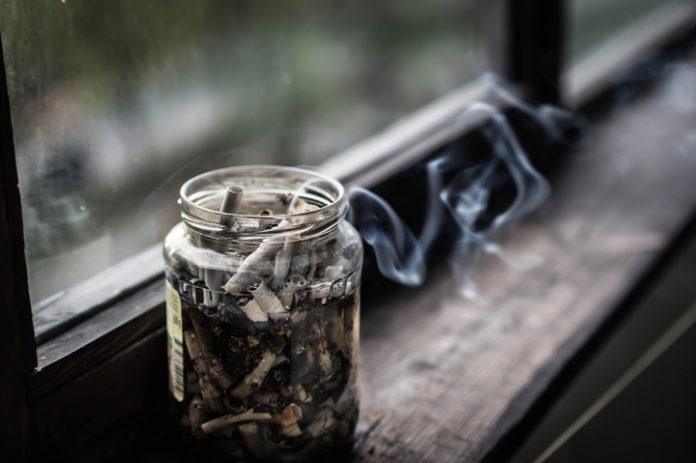 A study looked into how early exposure to thirdhand smoke (THS) affects the development of immunity and body mass in mice and discovered that neonatal THS exposure greatly reduced both.

The lingering remnants of indoor tobacco contamination continue after a cigarette has been used. Because smoke doesn’t simply disappear, its chemical byproducts can be found in furniture, walls and carpeting, and children are especially affected by THS.

“We have for the first time found that the neonatal mice were more susceptible than adults to the thirdhand smoke exposure,” said Bo Hang, lead investigator and staff scientist at Lawrence Berkeley National Laboratory in Berkeley, California. “We demonstrated that exposure to thirdhand smoke for three weeks, in both neonatal and adult mice, can cause significant and persistent changes in both peripheral blood cells and immune cells.”

The effects by age were calculated by creating two cohorts that were exposed to THS: one group (neonatal) was exposed from birth to three weeks and the other group was exposed from 12 to15 weeks. After they were removed from their cages, all the mice were grouped by females and males, and it was revealed that mice exposed to THS had lower body weight results than those in the control group.

The mice were placed in cages containing bedding fabrics, some containing THS. Control cages did not contain any materials with THS exposure, and both groups had weekly changes in fabrics.

“One very important aspect is that some chemicals in thirdhand smoke can react with common indoor pollutants to create new toxicants,” he said. “In addition, thirdhand smoke contains cancer-causing substances and can get more dangerous over time.

The researchers noted that after the THS-exposed mice were no longer exposed, they —  both male and female — gained considerably more weight than their counterparts and caught up to the control group at five weeks. Interestingly, THS-exposed male mice weighed the same as the control group at five weeks, however, the female mice exposed to THS weighed more than their control counterparts.

No weight changes were seen in the male or female groups of THS-exposed mice, aged 12 to 15 weeks.

This new research adds to a previous study Hang and his colleagues conducted in 2013, which showed that thirdhand smoke resulted in DNA damage in human cells. They also concluded that repetitive exposure to THS was worse than acute exposure because the residue of THS becomes more damaging over time.

The results of the new research propose that humans exposed to THS may have the same adverse effects on their health.

What can be done to stop the effects of THS at home?