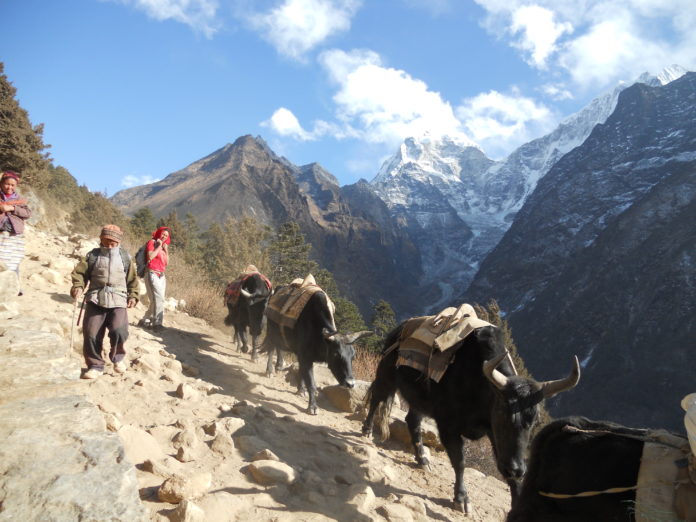 Every year across the Nepali Himalaya villagers harvest psychedelic honey, risk their lives to continue an ancient tradition, and sell the harvest on the black market in Northeastern Asia where it is used as a recreational drug.

For centuries, members of the Gurung ethnic group have climbed down the sides of cliffs through swarms of the largest bees in the world to collect their honey, which is remarkably inconsistent in its potency season-to-season.

Depending on the potency of the psychedelic qualities in the rhododendron trees–where you can find the bright pink, red, and white blossoms that are the Nepal’s national flower–the pollen produced honey ranging from ordinary to extremely hallucinogenic. The pollen is then siphoned from the flowers to make the psychedelic honey.

The potency of the drug doesn’t only depend on the pollen of the flower, elevation effects the type of honey in general, including potency.

Nepal’s Apis dorsata laboriosa is the bee, the largest in the world, and its home the Himalayan Hills. There have been references to the honey as early as 400 BC when Greek soldiers came across the honey in modern-day Turkey.

Not only is the bee referenced in ancient history, villagers like the Gurung as well as the Kulung people from eastern Nepal have collected, used, and sold the honey for centuries. Now the reddish fluid known colloquially as the mad honey is selling to China, Korea, and Japan for $60 to $80 a pound, around six times as much as the country’s regular honey.

However, obtaining this psychedelic drug for its sizable is no easy feat. To get to where the villagers need to be to harvest the honey, they are forced to climb up a ladder alongside the edges of jagged karst rock on the most infamously tall mountains in the world, all while being stung all over the body by the bees. Even for life in the Himalaya, where native people are paid to carry climbers’ gear up Mt. Everest, this is no longer a meaningful tradition–it is a way to survive.

A way that will not last forever as the danger is unsustainable, the market illicit, and the product a psychedelic drug.