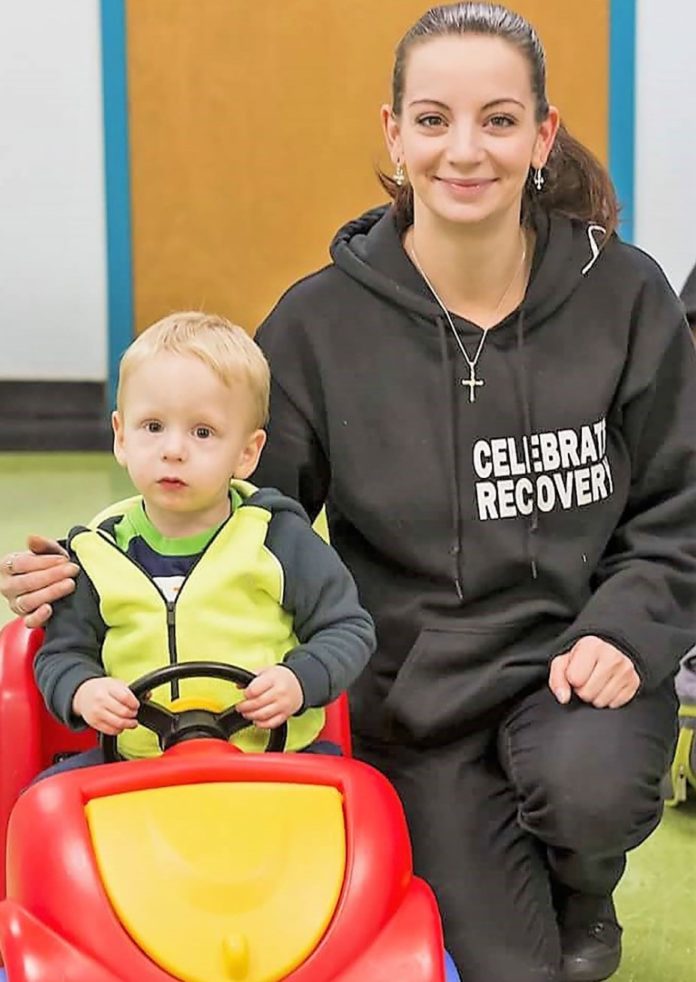 Kayla Whitehead of McMinnville, Oregon, was 13 years old when she started taking her mother’s prescription painkillers.

“My mother’s an addict herself,” Whitehead said. “So of course, I started going through our pill closet, and I got addicted that way. When her doctor cut her off, I got cut off. That’s when I picked up the needle and used heroin.”

She was 15 when she transitioned to using heroin – a cheaper alternative to the 40mg pills of OxyContin she had been taking before.

While deeply addicted to heroin, Whitehead met her son’s father, Matthew Jones. They used drugs together and eventually ended up becoming a couple. After dating on and off for about three years, she got pregnant, and they broke up.

“We separated during my pregnancy because I had gotten clean,” she said. “But he did not.”

The dark side of drugs

Before getting pregnant, Whitehead dealt with many of the negative consequences of addiction.

“I had no spirit left,” she said. “I was just an empty person. I had no gratitude in life. I lost my faith at that time even and was just a miserable person. I was homeless. I did my family wrong and a lot of people wrong. I’ve made my amends now and everything, but it was horrible. I was not a good person.”

Whitehead was arrested by the police at least 10 times – on charges of theft, possession of controlled substances, and probation violation. About nine months before she got pregnant, she was incarcerated for the last time, which is when she stopped using drugs.

Amidst her misfortunes, she was able to find sobriety, but the withdrawals will continue to be remembered as perhaps the most difficult time of her life.

“I was very sick,” she said. “Imagine having the flu 10 times over. Your body is in a lot of pain. You have diarrhea, and you’re throwing up. You can’t keep anything down. You’re sweating, but you’re cold. It’s very miserable, and that’s why many addicts stay addicted. Because of the withdrawals.”

During that time, Whitehead recalls telling herself that she would never go through a similar experience again – it was as if she had “some sort of spiritual awakening” that helped her stay away from drugs for good, she said.

Whitehead believes that her relationship with drugs was tremendously impacted by the fact that she was brought up by a mother who she said was not a present parent in any way.

“When I was younger, I didn’t realize what was going on,” she said. “Because of course, a child doesn’t understand, but my mom wasn’t an active parent. She was in bed a lot, sick. Mainly because she ran out of her medication. She wouldn’t go to school functions or anything like that.”

As Whitehead got older and had to battle with addiction herself, she understood why her mother behaved the way she did.

But the spiritual awakening and the realizations came too late – too late to protect her son from being affected by the cycle of addiction.

Her son’s father continued to use drugs and… (continue reading) Article Name
Breaking the cycle of addiction
Description
Kayla Whitehead of McMinnville, Oregon, was 13 years old when she started taking her mother’s prescription painkillers. Her mother was also an addict. When she stopped having access to her mother's pills, she started doing heroin. Whitehead met her son's father in the drug scene. However, he continued to use drugs after she stopped - now because of addiction her child's life is impacted forever.
Author
Livia Areas-Holmblad
Publisher Name
Addiction Now

Fear of fentanyl: a hidden killer