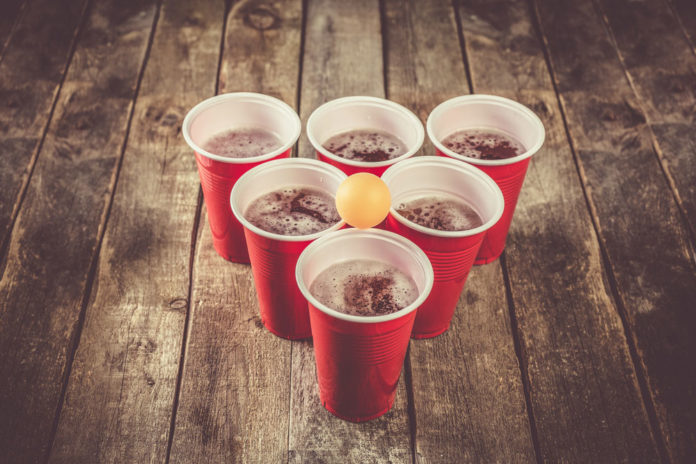 Drinking in college in the U.S. has fluctuated over the years but remains steady, according to a survey — Monitoring the Future, by the Institute for Social Research, University of Michigan — published in July.

Binge drinking increased as students grew older; 22 percent of 19 to 20 year olds reported having five or more drinks in the last two weeks in contrast to 40 percent of 21 to 22 year olds.

In 2018, the University of Delaware (UD) conducted a  Binge Drinking and Other Risk Behaviors Among College Students with 1,110 students and found that alcohol was the most used substance on campus, with 76 percent stating that they had drank over the last month.

College drinking has been perpetuated by pop culture, including  movies like “Van Wilder” that promote the idea that binge drinking is fun.

The U.S. Centers for Disease Control and Prevention (CDC) found that nearly 25 percent of people who binge drink are between 18 to 24 and that it is more common among men than women.

The CDC also found that 11 percent of the drinking done in the U.S. was consumed by people between the ages of 12 and 20, with over 90 percent of that this being consumed as binge drinks. Underage drinkers average more drinks during social occasions than adults aged 21 or over. There were about 190,000 emergency room visits associated with alcohol abuse in 2013.

The rational part of a person’s brain — the prefrontal cortex — does not fully form until they are 25 years old, according to the University of Rochester Medical Center. The prefrontal cortex regulates long-term cognitive behavior, decision making and social behaviors. Unlike adults, the emotional and decision-making part of a teenager’s brain is still developing. Because of this, teenagers often will react emotionally when confronted with a difficult situation while under the influence of alcohol.

The CDC estimates that youths who drink alcohol are more likely to experience problems in school or encounter social problems. Students who drink are also more likely to fall into legal problems such as being arrested for causing harm to someone while under the influence of alcohol. Hangovers and illnesses affected underage drinkers, whose bodies were not accustomed to the effects of alcohol.

Drinking can lead to unsolicited, unintended and unprotected sex. This could cause a large disruption in the natural growth and development of a student. The threat of physical and sexual assault also increases when underage drinking is involved.

Approximately 97,000 students between the ages of 18 and 24 stated that they had undergone some form of sexual assault that involved alcohol, according to information posted by the National Institute on Alcohol Abuse and Alcoholism.

Sexting while drinking has become problematic, according to research conducted by Dr. Allyson Dir of Indiana University School of Medicine. Her study, published in Addiction Research and Theory, highlighted that sexting had accelerated the link between drinking and sexual assault. It suggested that sexting while intoxicated may increase the chance of college women being sexually assaulted.

Although there is no singular approach to preventing student alcohol abuse, many government and educational institutions have attempted to implement more effective measures.

The National Institutes of Health published a report detailing ways to prevent college drinking. Researchers stress that a healthy campus environment is vital. In addition, having officers enforce drinking laws on college campuses can potentially limit the possibility of injuries associated with alcohol use. Reversing the cultural norm that has made it acceptable to binge drink may help college students recognize drinking’s negative connotations and amend their behavior.

The report stressed the need to manage program implementation effectively and prevention techniques that have had success in the past. A strategic outcome-driven method must be implemented to address the needs of each university, the authors added.

College students with alcohol use disorders can also benefit from resources such as collegiate recovery programs. These programs provide an environment where students can feel comfortable seeking the assistance that they need.

Other solutions have been suggested in an environmental strategy report by the Pacific Institute for Research and Evaluation. One suggestion includes raising the price of alcohol to make it more difficult for students to purchase as well as enforcing the age restrictions. The report also stresses ensuring that anyone that handles alcohol as well as anyone in law enforcement is trained to recognize when a minor is attempting to handle liquor.

The report highlights the need to reduce alcohol venues located near schools in an effort to deter drinking. The plan also calls for altering the attitude on drinking on campus. Another proposal includes adding more Friday classes to limit the potential of Thursday night parties. Sober parties are being suggested as an alternative as a way to give students a chance to socialize without the pressures to drink.

Not allowing financial assistance from alcohol companies is emphasized as another option to avoid drinking on campus. Monitoring sporting events is underscored as a way of limiting drinking at tailgate events.

Recently, some universities like UCLA have implemented an alcohol policy that discourages drinking by students and educated staffers to have the ability to decipher who they are selling to.

It also goes further in rejecting social content that promotes drinking as a way to achieve success. The policy also entails encouraging students who have been drinking to seek help should they be caught drinking on school grounds.

Other schools like the University of Northern Florida (UNF) have completely banned the sale of alcohol in parking lots, parking garages and select areas on campus. UNF has also begun implementing the advertising of nonalcoholic beverages as an alternative to its alcoholic content.

Some schools like Davis and Elkins have banned hard liquor completely or barred the use of games that encourage binge drinking while allowing alcohol at functions to groups that have shown that they are responsible.

UD has a policy that allows resident hall students to know if any unauthorized alcohol is being possessed or consumed in the dormitories. The restrictions also limit guests who are of age from drinking in the prescience of minors. Article Name
The Impact of Drinking by College Students in the US
Description
Drinking in college in the U.S. has fluctuated over the years but remains steady, according to a survey — Monitoring the Future, by the Institute for Social Research, University of Michigan — published in July.
Author
Robert B Hayek
Publisher Name
Addiction Now