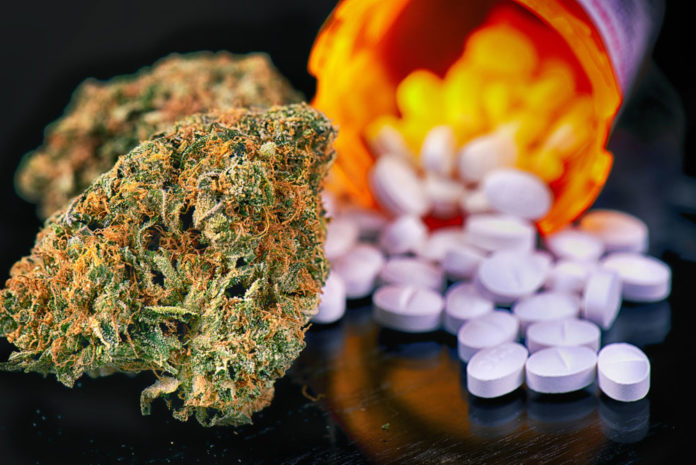 People who use marijuana are more likely to misuse prescription painkillers and develop a prescription opioid use disorder, a new study suggests.

Conducted by analysts at the National Institute on Drug Abuse and Columbia University, the data — taken from the National Epidemiologic Survey on Alcohol and Related Conditions — included interviews from over 43,000 adult Americans between 2001 and 2002. The researchers then followed up with over 34,000 of the participants between 2004 and 2005.

“As compared to adults who did not smoke marijuana, those who smoked marijuana were almost six times more likely to develop misuse of prescription opioids and almost eight times more likely to develop an opioid use disorder,” said lead investigator Dr. Mark Olfson, professor of psychiatry and epidemiology at the Columbia University Medical Center.

Participants who revealed a past-year use of marijuana during their first interviews were 2.2 times more likely [to misuse opioids and develop a disorder] than non-users by their follow-up interviews. They were also 2.6 times more likely to initiate a prescription drug misuse, which includes taking higher doses of a drug for longer periods than recommended, using it without a prescription, or for purposes other than intended.

“Even though most people who smoked marijuana at the start of the study did not develop an opioid problem three years later, they were at a significantly higher risk of developing these problems than those who did not smoke marijuana,” Olfson said. “Contrary to some previous reports that were based on population-level patterns, we found that marijuana use tends to increase rather than decrease the risk of prescription opioid use, abuse or dependence.”

Past research has suggested that marijuana use could stave addiction and overdoses related to prescription painkillers by providing an alternative aid to pain relief. Most of this data comes from comparisons from that states that legalized marijuana rather than those that did not.

However, this particular research targets individual users of marijuana versus nonusers and their likelihoods related to opioid disorders and misuse.

“The new study findings temper enthusiasm for the view that marijuana can prevent or reduce nonmedical opioid use,” Olfson said. “This suggests that… (continue reading)